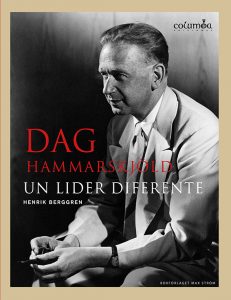 Dag Hammarskjöld is a key piece in world history of the twentieth century. In the midst of the Cold War, in his capacity as Secretary General of the UN (1953-1961), he faced personally the most burning issues of his time: the crisis of the Suez Canal, the Arab-Israeli conflict, and the last and most touchy of all : the splitting of Congo to become an independent state. An almost impossible negotiation, that culminated with the shoot-down of the airplane in which he and fifteen members of his retinue were travelling in a desperate attempt to achieve peace in an African continent in turmoil. Dag Hammarskjöld assumed the position of UN Secretary General owing to a consensual solution that presumed him a meek and docile bureaucrat. However, he faced the politics of the superpowers and stood for the interests of the small nations with immutable integrity. His ability, energy and defense of principles shaped the modern UN.

In this fascinating biography, Dag Hammarskjöld, the human being, public official and diplomat, appears in an unprecedented manner. This book is also the most abundant in graphic material ever edited about Hammarskjöld, which includes many unpublished photographs. The author tells, with acumen and personality, the fantastic story of a life that was marked by duty and humanism, but also by a great loneliness. Hammarskjöld, endowed with exceptional courage and integrity, stands as an example of humanity and justice.

Henrik Berggren was born in Uppsala, Sweden, in 1957. He is a historian and journalist who studied in Stockholm, Göteborg and Berkeley. He graduated in Stockholm in 1995 with his thesis Die Jugend des Jarhrhunderts; Retorik, Politik und Modernität 1900-1939 (The Young of the Century; Retorics, Politics and Modern Times 1900-1939). For years now Berggren has been the editor in chief of the Swedish newspaper Dagens Nyheter. His acclaimed biography of Olof Palme has been translated into six languages.