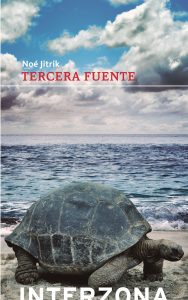 The 91 years of Noé only serve to explain the impeccable trajectory of a man necessary for Latin American literature, capable of renewing himself in each of his works.

A family comes to a seaside town to spend their holidays and stays in the small hotel of a German couple. In the conversations shared with their hosts, the ghosts of a reviled and unenchanting Germanic past soon emerge. However, for Sigismund, father of the newly arrived family, this encounter and the trip to the coast imply a much more transcendent discovery: the possibility of leaving behind the past life, and the evidence that identity will from now on be a hesitant concept. Alien from himself, Sigismund needs to immerse himself in his solitude and dive to escape the atmosphere of supposed neatness that hides the existential emptiness that reigns over his life. It is the escape that the sea promises.

"It would be that the sea is like that, a source of wonders that terrify and subjugate humans, inciting them to enter their secrets to disappear into them after making them lose their memory."

Noé Jitrik was born in Rivera, La Pampa, on January 23, 1928. He is a literary critic, essayist, poet, and storyteller. Since 1990 he has directed the Institute of Hispano-American Literature at the University of Buenos Aires. He was a member of the Contorno magazine along with David Viñas, Ismael Viñas, León Rozitchner, Oscar Masotta and Carlos Correas. He taught at universities in Argentina, France, Mexico - where he lived in exile between 1974 and 1986 - Colombia, the United States, Puerto Rico, Uruguay and Chile. In 1993 he was named Knight of Arts and Letters by the French government, and was recognized as Doctor Honoris Causa in by the Benemérita Universidad Autónoma de Puebla (Mexico), in 2009 by the National University of Cuyo, in 2010 by the University of the República (Uruguay) and in 2017 by the National University of Formosa. In the territories of fiction, he has published: La fissura mayor (stories, 1967), Call before entering (stories, 1972), Citas de un día (novel, 1992), South seas (novel, 1997), Long Beach (novel, 2006), Destruction of the building of logic (novel, 2009), Miscalculation (2009), which brings together his poetry written between 1983 and 2008; Sunsets (2012), Casa Rosada (2014), The river of tied calves (2014), La nopalera (2016) and Terminal (2016).