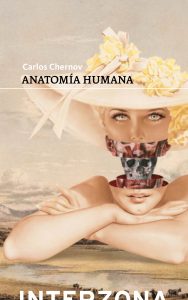 InterZona presents the reissue of the first novel by Carlos Chernov, winner of the 1993 Planeta Prize, and a cult text that consecrated the author. This rescue makes available to readers a dystopia with full force in current discussions about gender and masculinity. An overflowing prose delineates gloomy spaces where the protagonist, a man, must make a pilgrimage in a transvestite in a world about to be extinguished by cataclysms and the almost complete disappearance of men.

Human anatomy reflects the great crisis of the sexual genders in a society that has exhausted the experiences of power under the control of the masculine and shows the cracks of a patriarchal model on the way to extinction. From the combination of an absurd premise, a serene language and a brutal sense of humor, Carlos Chernov builds an adventure novel that keeps us in suspense while revealing the disturbing fissures that fracture what we innocently call "reality".

Carlos Chernov (Buenos Aires, 1953) is a psychiatrist and psychoanalyst. He has published Brutal Amores (short stories, 1993. Fifth Centennial Award of the Honorable Deliberative Council, 1992), Human Anatomy (novel, 1993; interZona, 2020), The Chinese conspiracy (novel, 1997), The passion of Maria (novel, 2005) , Own love (short stories, 2007), The imperfect lover (novel, 2008. The Other Shore Award, 2008), The soulless (novel, 2011. Unique Prize for Unpublished Novel of the Municipality of the Autonomous City of Buenos Aires, 2011), The star system (novel, interZona, 2017) and Amo (short stories, interZona, 2019). He received a grant from the Civitella Ranieri Foundation in 2010. His texts have been translated into English, French, Italian and Hungarian.