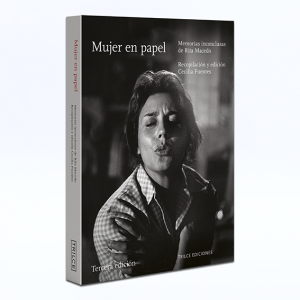 Rita... Rita Macedo. Woman, lover, mother, wife. Shooting star during the Golden Age of Mexican cinema. Impatient mother of Luis de Llano and Julissa. Lover of convenience and lover of love. First wife of a young Carlos Fuentes, naughty and womanizer. A woman of feelings who wanted to leave us her memories and experiences from a mischievous and self-critical, raw and realistic eye. On the morning of December 6, 1993, Rita Macedo visited her son Luis de Llano in his office, telling him she was there to say goodbye. Hours later, she took her own life.

Cecilia Fuentes Macedo was born on August 7, 1962 in Mexico City. She studied drawing and photography at the California College of Arts and Crafts in Oakland, California. Later she moved to New York to study for a degree in Communications at the New York Institute of Technology. Interested in personal computers, which had recently emerged during her stay in the United States, she took a degree in microcomputer systems at The New School for Social Research in Manhattan.

From a very young age, she has been involved with the media, performing arts and literature. One of his first jobs was to transcribe some of the manuscripts of his father, the writer Carlos Fuentes. He worked in various institutions and companies such as the UN, the National Council for Culture and the Arts and Televisa. He has written several articles for the newspaper Milenio. Mujer en papel, is her first book, in which, among other things, she tells the story of her parents.