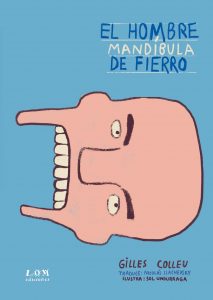 This is the story of a boy who loved books and had a father with a powerful jaw. His jaw was so, so strong, that he was able to lift different objects with it, and some of them really heavy. And that was not all: on those objects this child reader climbed, who was the star of every show, although he would later returnto his inseparable books.

Gilles Colleu is a publisher and has been an associate professor in the book trade department at the Université de la Méditerranée in Aix-en-Provence for some twenty years. He works as a consultant for small, medium and large publishing houses and has participated in the production of more than 2,500 books. In addition, he is the author of cultural multimedia titles for young people translated into some twenty languages. With Jutta Hepke, he created and manages the publishing house Vents d'ailleurs, whose catalogue attempts to build bridges between the cultures of the South and those of the North. His work examines the socio-economic aspects and changes in the sector brought about by, among other things, its financialisation and the commercialisation of books. In 2002 he joined the International Alliance of Independent Publishers, one of whose struggles concerns the defence of bibliodiversity. In the course of conferences, interventions and articles, he insists more particularly on the mechanisms that endanger our cultural diversity on a global scale. He has published a book for the International Alliance of Independent Publishers: Independent Publishers: From the Age of Reason to the Offensive.

Sol Undurraga is a Chilean illustrator and architect by profession. Her work, which she also signs as "Mujer gallina", began in Mexico and has appeared in medias such as the magazine of the Universidad Autónoma de México and the weekly El País, among others. She has published with labels such as Nobrow (England), La Joie de Lire (Switzerland) and Amanuta (Chile) and in 2018 she won the Opera Prima prize at the Bologna International Children's Book Fair for the book La Plage published by L'Agrume (France) and the Green island prize at Nami (Korea) for the same title.  She has also been selected for various international exhibitions in Italy, Portugal and Korea