The whale who imagined 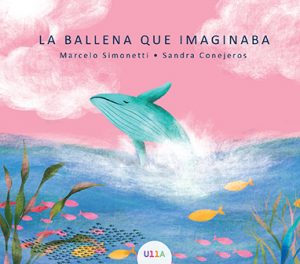 Sandra Conejeros (1983, Chile) is a Chilean designer and illustrator. She has published her work in the books La Abeja Cristalina (Planeta Sostenible) and the large-scale illustrations Alice in the country of Biblioniños (Puente Alto Public Library, Chile). As author her first children’s book is Busco Encuentro, Cuántos Cuento (Seek and find How Much Do I Count, ULLA, 2018). And now she has illustrated La ballena que imaginaba (The Whale who imagined, ULLA, 2019). Her work has been exhibited in Chile, Argentina, Colombia, Mexico and Poland. Her illustrations have been selected for the VI Ibero-American Catalog of Illustration (2016), the catalog Latin American Illustration (2015 and 2016) and the 14th version of the "3×3 Magazine Illustration Show (2017), among others. She received the Silver Dog Award in the 8th Bogotá Word Image Salon (Colombia, 2017) and was finalist in the Design Biennial of Peru (2019).