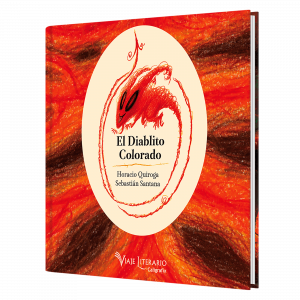 The boy was shocked by the earthquake, when in the deep crevice at his feet he saw something like a little red thing that was climbing the walls... Thus begins an evocative story of friendship between Ángel and a charming little devil. Thanks to the ingenuity and cunning of this being that emerges from the bottom of the earth, plus the antics that they experience together, both change their lives forever.

Written by the greatest Latin American short story writer, with a completely different style from the rest of his work, this story has a great deal of humor and emotion. It is a fast-paced story full of adventures that captivates the reader. Sebastián Santana's illustrations enhance this story, endowing it with endearing images.

Horacio Quiroga was born in Salto, Uruguay, on December 31, 1878 and died in Buenos Aires in 1937. He was a short story writer, playwright and poet; he is considered the master of the Latin American tale. His naturalistic and modernist prose stands out for its intensity and precision, generally reflecting the hardness and passion typical of his real life, where personal tragedies were frequent and marked his work.  Based in Buenos Aires, he developed a vast production of stories for children and adults; although without a doubt it is his residence in the missionary jungle where he builds his own house and innumerable inventions, which influences his artistic creation. His insatiable restlessness not only made him dedicate himself to literature but also dabbled in chemistry, photography, mechanics and cycling. Among his main works are the poems Los arrecifes de coral (1901) and the stories Los perseguidos (1905), Cuentos de amor de locura y de muerte (1917), Cuentos de la selva (1918) and Anaconda (1921).He wrote El Diablito Colorado especially for his two children: Eglé and Darío, and it is part of Cuentos de mis Niños, a vast and little known work that reveals all the talent and originality of this magnificent writer.

Sebastian Santana was born in La Plata, Argentina in 1977. Visual artist, illustrator, photographer, graphic designer with an important production for children and adults. Some of the recognitions he has obtained are the Paul Cézanne Award (Embassy of France in Uruguay, 2018); the ALIJA Grand Prize for Mañana viene mi tío (Association of Children's and Youth Literature of Argentina, 2014); the Bartolomé Hidalgo Prize for Figurichos by Horacio Cavallo (Uruguayan Book Chamber, 2014). He illustrated El Diablito Colorado while he lived in Valparaíso, Chile, and it is the first time it is published in Chile. In relation to this work, it can be said that he has a very close link with some of his own and other people’s devils, so illustrating these adventures was something that was very familiar to him, both because of the relationship he has with these little red beings, and because he lived the experience of an earthquake in 2015.