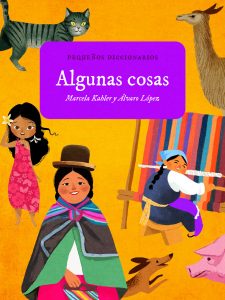 In "Some Things", preschool readers can relate to simple habits and social aspects such as greeting, some trades and rites, in four languages: Spanish, Mapudungún, Aymara and Rapa Nui.

Alvaro López Fuentes (October, 1973, Santiago de Chile) has a Bachelor of Art and a Master's in Visual Arts from the University of Chile. More than twenty years working as an illustrator and designer in Chile and Spain. He has worked for publishers such as Random House and Planeta as an illustrator and cover artist.